Your visit to Sky City would not be complete without a visit to the Gaits’i Gift Shop, which displays authentic world reknown Acoma Pueblo pottery, Native American turquoise jewelry and other fine art by artisans from New Mexico and Arizona. Gaits’i Gift Shop features a selection of Acoma pottery, which is hand coiled and tempered with walls so thin that they ring with the clarity of a bell.  Acoma pottery has been revered by art collectors for more than a century. Members of the Haak'u Museum get 10% off most purchases.

Artisans of the Month 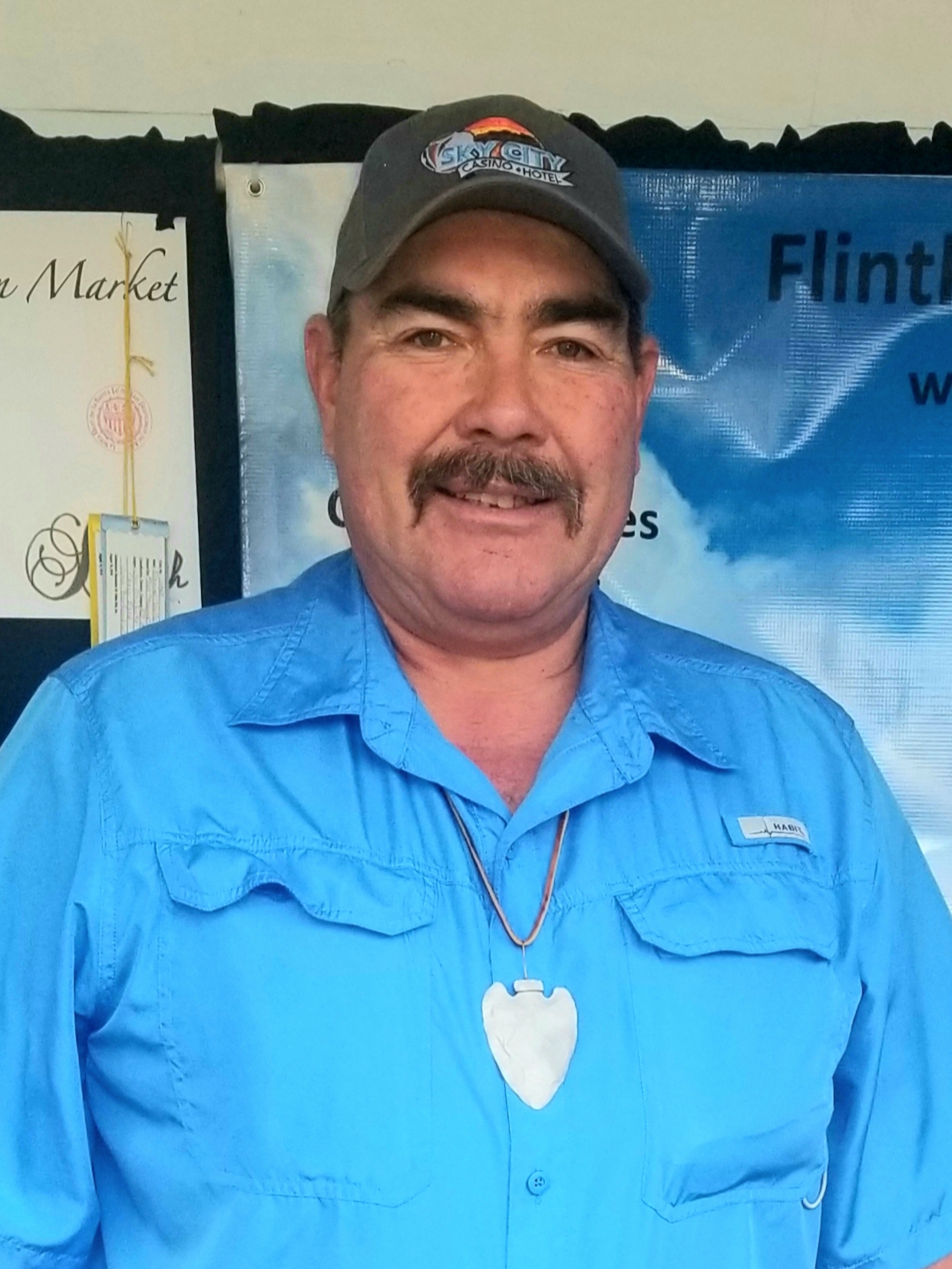 Dan Vallo is a Member of the Acoma Pueblo, he spent his younger years living on the reservation in Acomita, and there he watched his grandmother Helen R Vallo make pottery. Dan also spent some time with his great uncle Clyde hunt AKA Chief Sunny skies who was a well-known silversmith. “This is where I get my artistic inspiration”. Dan now lives in Bernalillo New Mexico with his wife Kelly.

Mostly known for his Flint knapping creations but wood working has always been his hobby. Dan Started flint knapping in the late 1980s, mostly self-taught until the onset of google & you tube, where now days anyone can watch a video on the basics of flint knapping. He was inspired by the many arrowheads he found while out exploring the Acoma reservation & hunting in the fall, his father Henry Vallo also an accomplished Silversmith showed him the basics of Knapping.

In the early days he just made small arrowheads and small tools trying to replicate some of the pieces he found, later on actually using his tools for hunting, in 2001 Dan went on a Hunting safari in Africa and was able to use his primitive arrows & knives, that trip really opened the doors to the art world. While shopping for gifts to return with Dan picked up many art pieces and displays, the items were all very unique and all hand made. Soon after that trip he started making Flint knapped knives with interesting display stands to show off the knife.  The very uniqueness of his art is what makes it so interesting, not one of his knives are the same.

Dan started attending various Indian markets in the last few years and has really enjoyed the many fellow artists he has met and the encouragement they have provided regarding his art.  The handles of his pieces are all different,  just by the nature of the materials, Antler, hardwood, leather & cholla cactus wood, which  has been a favorite of some, in 2019 Dan started to use some of his grandmothers pottery designs on the handles the challenge was that the natural pottery paints that Acoma potters use is  designed to be baked in, so the traditional paint could not be used, Dan experimented with various different types of paint and is now using Acrylic  paint to create the beautiful designs on his art.

Marilyn Ray is a member of the Yellow Corn Clan and born in 1954 into the Acoma Pueblo. She began experimenting with clay at the age of 12. Marilyn was inspired to learn the art of working with clay from observimg her grandmother, the late Dolores S. Sanchez. She has mastered all the fundamentals by the age of 18 and has established as one of the great storyteller makers of our time. Her storytellers have been commented as being the largest, most complex innovative styles.

Marilyn’s claim to notoriety started with the completion of a large storyteller in 1979. The following year she won an honorable mention award for a nativity set at the New Mexico State Fair. Today, Marilyn’s storytellers are considered collector’s items. They are featured in several books and magazines. She has won numerous awards at the Santa Fe Indian Market.

Marilyn continues her skills in both traditional pottery making and figurative work. She signs her sculptures as Marilyn Ray, Acoma, N.M. followed by a hand drawn lizard.

The main modal is empty.